The boys – especially Rondel – have been deeply interested in dinosaurs for quite a long time now, and are beginning to branch out into animals of all types. It really began with the Planet Earth documentaries that I would put on for them during Aubade’s nap times, and has continued with a short series called Africa’s Deadliest that is just as overly dramatic as the name suggests but which contains some great footage of wild animals as well as a lot of scientific facts. When we found and caught a lizard (well, rescued it from a bowl it had fallen into, to be more accurate) not too long ago, he was entranced: he understood intuitively how to hold it gently and carefully, and let it climb all over him with no fear, and ended up playing with it for 45 minutes before releasing it so it could return to its natural habitat.

So I was not surprised when he asked to go to the zoo this week, nor when he actually showed in interest in seeing the animals instead of just the dinosaur exhibit and the splash pad! And it was a good day to go!

We did of course have to visit the dinosaurs: 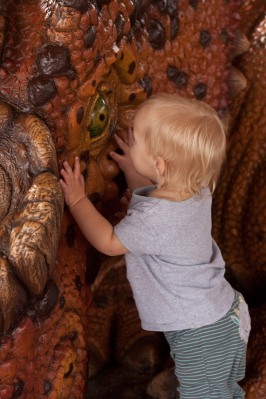 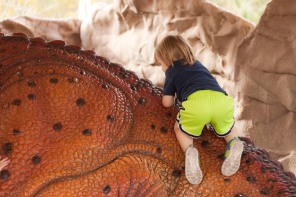 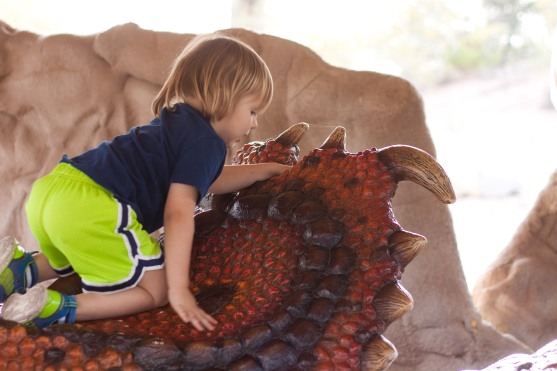 Obviously we couldn’t observe any live, wild, natural animal life here – but we had some discussions about the different types of nests made by different dinosaurs (we compared the twig nest of the Citipati – a feathered broody dinosaur – to that of the Diabloceratops, which was too large to brood its eggs and most likely made a mud nest like a crocodile), as well as about how the different types of dinosaurs might react if they saw us!

From the dinosaur trail the bighorn sheep exhibit is also visible, and Aubade got very excited when I pointed them out and told the kids what they were. She leaned forward in the stroller as far as she could, waving and yelling, “Hi!” – and then she turned to me, smiled, and matter-of-factly said, “Baa!” It was neat seeing her make the connection between the distant animal on the mountainside and the fuzzy white blob in her Moo, Baa, La La La board book by Sandra Boynton.

When we left the dinosaur trail, it seemed like a lot of the animals were active and awake – we got to see baboon, mandrills, oryx, cheetah (unfortunately they were difficult to see, but we did manage to spot them), otters, flamingos, zebras, and more! The flamingos were standing right by the fence, so we stood on one leg like they did, and noticed how they could turn their heads all the way around backwards to use their back like a pillow, and wondered why their large beaks only ever opened a very small amount.

Per Rondel’s request, after a cool-down break at the splash pad we visited the Tropical Birds trail, which includes a small aviary. Apparently, it is mating season at the zoo – so all the birds were awake and showing off their finery! The male peacock had his full tail fan extended, and kept shaking it at the peahen, making a surprisingly loud rattling noise when he did so. In the aviary, the male argus pheasant was strutting around on the path, making a call that the zoo keeper told us he only made during this season, instead of hiding in the back corners as he tends to do the rest of the year.

Rondel was absolutely captivated. He approached the bird slowly and quietly, and held his hands tightly back so he wouldn’t accidentally touch it (he would jump out of the way if the bird turned around so that he wouldn’t end up touching his long tail feather!), and just squatted down gazing at him for a long time, as other groups of people came and went.

Limerick was a little less certain, but he eventually went over as well. I was super proud of both of them – they are often very impulsive and active kids, and they had no trouble at all adjusting their behavior to what was needed by the animals. We talked a bit here about how a lot of viruses can jump between birds and people, so if we touched the birds we could get them sick or they could get us sick… my molecular biology background always ends up showing itself somehow 🙂

We finished up with the tiger and the Komodo dragon. I had never actually seen the Komodo dragon exhibit at our zoo, but Rondel instantly remembered them from the new Planet Earth series and was incredibly excited about them. They weren’t moving much – just soaking in the sun – but they are impressive creatures. We noticed how it was basking in the sun to soak up the energy it needs as a cold-blooded animal, and counted its claws (five on each foot, just like us, in case you wondered).

And of course we played on the Komodo dragon statue for a while!

The most wonderful thing about homeschooling is the ability we have to follow our interests – obviously in going to the zoo for a whole morning instead of adhering to a lesson plan or a class schedule, but also in deciding when to linger at an exhibit and when to move on, when to talk about the details of how an animal lives and when to stick to the basic overview, when to focus on the live animal exhibits and when to simply just have fun. The experience we had today was so real and so rich that I wouldn’t trade it for any classroom I’ve ever known.