Our little family’s affection for pumpkins started early, with our pregnancy announcement for Rondel:

However, it took us a year or so to find our favorite place to take the kids each fall! After this year, though, I will say that Vertuccio Farms is our official pumpkin patch of choice. We typically take advantage of their Toddler Tuesday offer and get in for half-price and the guarantee of avoiding school groups and field trips 🙂

The biggest draw is probably the giant air-powered jump cushion, thankfully (but somewhat inadequately) shaded, on which endless jumping and flopping and bouncing can take place. Even Aubade, already almost ready for her morning nap, got up on her knees and bounced up and down with a grin of pure delight on her face! Rondel loves it but has a tendency to get too aggressive and over-excited (this year, that looked like pretending to a be a scary cheetah and trying to tackle people – mostly Limerick, growl at people – all kids smaller than himself, and eat them – also mostly Limerick), which is our cue to move on. 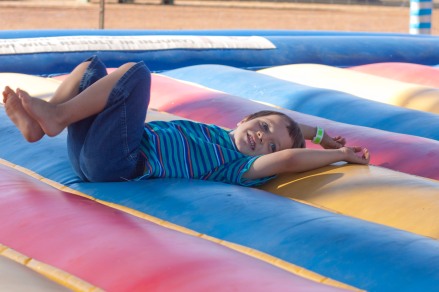 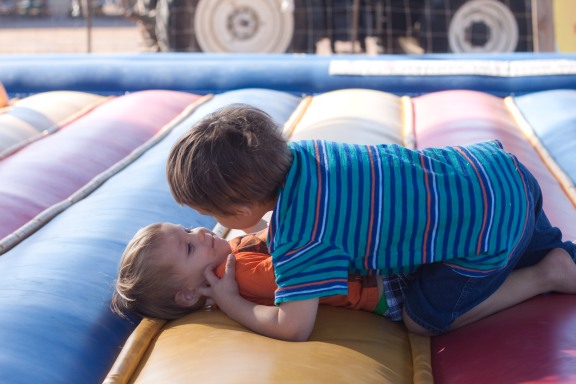 We milked a model cow, slid down massive tunnel slides made from pipe segments, clambered over a spiderweb made of ropes, collected rocks, ate snacks, and chose pumpkins to bring home to carve. We also lost Limerick for a while but discovered him twenty feet up in the air ascending to the tallest tunnel slide, so all’s well that ends well – and I also learned that apparently orange isn’t a good color to choose if you want your child to stand out at a fall festival as half the kids there were wearing orange in some form or fashion.

In addition, this year there was a new activity: a hand-pumping station where kids could push plastic ducks down half-pipes from one horse trough to another by pumping up water. Both boys were fascinated by it, and I had to tear them away so we could make it home in time for me to get to work.

In fact, there were so many things to do that we came back a second time to do more, and to hit up our old favorites a second time!

All three kids were having blast climbing up the tire tower until I told them I wanted them to keep their shoes on unless we were on the air cushion (I’d found a piece of broken glass), and even let me get a rare picture of all of them simultaneously. 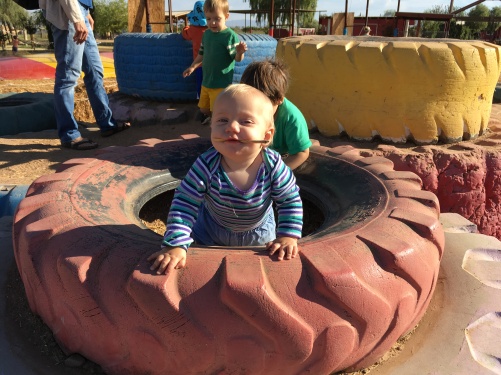 We got to see piglets running around trying to persuade the adult pigs to play with them, and I even found spare change in my purse to buy some goat food. Rondel let the goats eat out of his hand. I was so amazed. He stood perfectly still and held the food out for them without flinching as they licked it gently off his fingers (and it’s a different sort of sensation – I had expected much more of a reaction from him). I think that was his highlight from our second trip; I know it was mine, and I wish I had been able to get a picture of it.

I was able to get pictures of the boys doing the giant tube roll, though! It’s somewhat self-explanatory (although what isn’t obvious at first glance is that those tubes are heavy. I had to push the boys from the outside and it was hard work!)

Despite the heat and the crowds (much better on the 31st than on the 24th, by the way), we had a great experience at Vertuccio and will definitely plan on going back next year. Just remember to bring lots of water, and be ready to get tired and dirty! In a place where the cultural trappings of fall are mostly absent from our natural environment, this makes for an awesome way to mark the change of seasons before the holidays begin.