It all began when Rondel hung an apple ornament on my parents’ Christmas tree (we don’t have space for one, so we are vicariously enjoying theirs and stopped by to help decorate it!).

Limerick noticed this apple, hanging alone on its branch, and found an apple of his own. Diligently, despite the slippery nature of pine branches (especially ones that are already supporting ornaments), he attempted to hook his apple right next to his brother’s, and finally succeeded. He was so proud of himself! 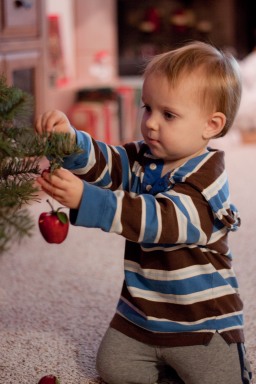 It’s those little things that show me how much Limerick loves and looks up to his big brother. He wants to be like him, to do the things he does, to be with him – even to the point of hanging his little apple on the same branch as Rondel’s big apple. This is the spirit that causes him to greet Rondel with a hug the moment we pick him up from his Sunday School class, or look to Rondel for a reaction whenever he says something silly, hoping to elicit a laugh from his big brother.

When they hit each other, take each other’s toys, and knock down each other’s towers, and the screams and cries fill the air, I don’t despair of their love and future relationship, because I can remember these other things, the moments of appreciation for and enjoyment of each other, that are woven in the very fabric of their lives. With that backdrop, the conflict itself can become a source of greater strength and depth in their relationship, a thread essential to the tapestry of their growing characters.