So after our beautiful 2-3 weeks of cool relatively autumnal weather, summer decided to visit again and we’ve had highs in the 90s for a week or so straight. Sigh.

The boys have enjoyed pulling out the water play again for one last hurrah, though, and we took advantage of the chance to use up the last of our water balloons before the dry winter could render them useless. 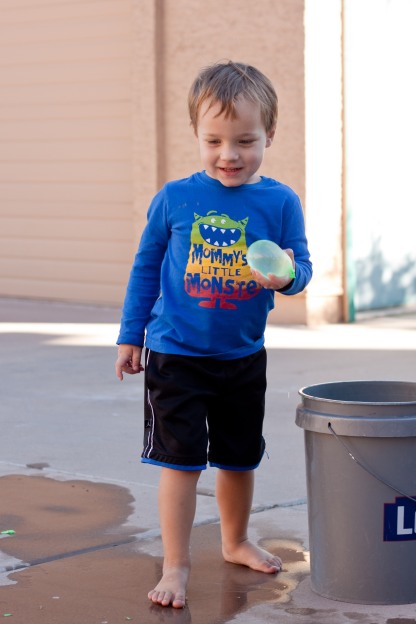 You can tell from the long sleeves that it had been cooler in the early morning, at least 🙂

Both boys’ main objective seemed to be popping the water balloons as quickly as possible, so they mostly just threw them into the rocks as the most reliable way to get the pop to happen – they didn’t always throw hard enough to get them to pop on the concrete. Limerick also enjoyed stomping on them as an effective way of making them pop, and Rondel humored me enough to play catch a few times and throw the balloons at me instead of the rocks.

It may not be much of a fall here in the desert, but we’re finding fun things to do with what we have, and enjoying our colored leaves and pumpkin vicariously through our picture books. Maybe next year we’ll make it up north to see the changing colors in person!