It is quite a privilege to watch a very young child playing independently. I brought stackable cups and a random bowl to the park with us and simply set them on the ground to see if the boys would notice or be interested.

The complete focus, the utter absorption into the task the child has created, is a beautiful thing. Limerick had no direction about what to do with those cups: he was able to investigate their properties himself and decide what he wanted to accomplish.

Sometimes it’s tempting to step in and offer a hand, whether to direct their play (so it makes more sense from our adult perspective) or to provide a layer of support and security (so we can ease our own adult anxieties). But though his steps might be shaky, Limerick doesn’t need me right next to him. Letting him walk by himself, as he so very much desires, will strengthen his independence and self-confidence; constantly shadowing him with offers of help will begin to convince him that he is incapable on his own.

In deciding to go get the blue cup and bring it over with the other cups, and in carrying out that task by himself, he learned about planning and execution. He practiced balancing in a myriad of different positions, and began to grasp concepts of distance and the size and reach of his own body. It may look painfully slow to the observer, but his brain was working furiously the whole time to assimilate and respond to all the incoming information. 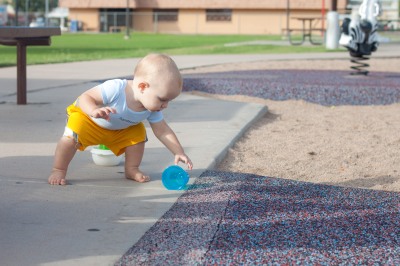 His estimation was about an inch or so off – I could have reached over and pushed the cup that much closer to him, but instead he was able to discover that if he stretched out just a bit father than he would normally be comfortable with, he could get the cup to roll towards him and would then be able to pick it up.

Finally – success! Cup in hand, he turned and walked back over to his previous play station, where the other cups and bowls were waiting for him. He had set a goal for himself, worked hard to accomplish it, and carried out his plan, without any adult input, interaction, or assistance. The feeling of a job well done, of new skills mastered, is an incredibly positive one, so why would I want to take that away from him by offering unneeded help? Our babies will surprise us with their abilities and intelligence if we give them the opportunity.

It is not, in the long run, helpful for a child for us to be constantly in their space, giving them adult input, direction, and aid; it shuts down their creativity and hampers their development toward independence. It is our silent and somewhat removed presence – there if they do need us, but unobtrusive when they do not – that can be truly empowering for the young child at play.