I’m linking up with Kelly again today and I have no theme at all! Proceed for seven very random facts about myself and our week, some of which (say, 1 and 3 maybe) may explain my relatively low posting volume this week.

I hope you all had a great week! Are you excited for Halloween? Are your costumes ready or are you in the midst of last-minute creations like we are?

I’ve been spending a lot of time on Pinterest lately, in an effort to avoid Facebook (and while waiting for my books on hold to become available!), and I’ve found some really encouraging, helpful, and inspiring posts! I’ve also found quite a few off-the-wall recipes that I’ve made to varying familial approval… but let’s not dwell on that.

I think the following two images which I found there are amazing examples of the difference between awareness of autism and acceptance of autism (the first was uploaded directly to Pinterest by a user, and the second is from the Thirty Days of Autism blog): 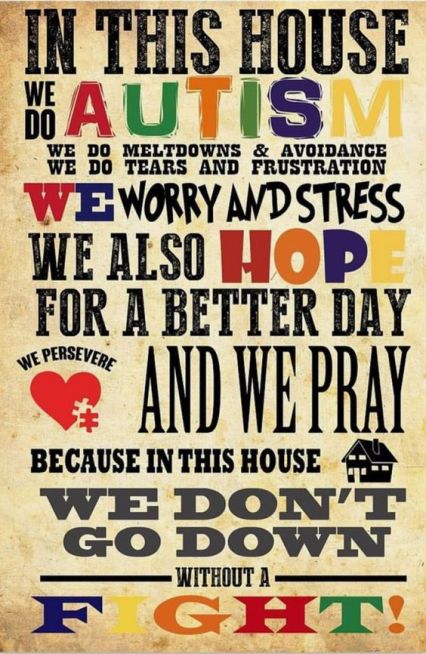 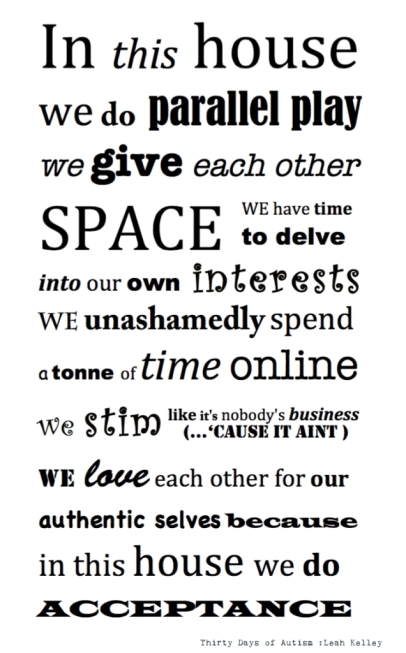 Notice how in the first poster only the negative effects of autism are mentioned: meltdowns, avoidance, tears, frustration, worry, and stress. Autism is an evil, something that one needs to fight through with hope and prayer, like a sickness that needs to be overcome and that left unchecked would destroy one’s life. (And if it were a sickness, like cancer, that would be more than fine! As it is actually a neurological and developmental difference that is always going to be part of who a person is, however, this attitude can feel like a personal attack on an autistic individual’s identity.)

In contrast, the second poster focuses on the unique behaviors caused by autism – things that are different from normal, but neutral rather than negative: parallel play, a need for space, deep focus and passion, love of technology, and stimming. Autism is portrayed as a part of who that family is – something for which they love each other, not something despite which they love each other. Acceptance gives them the freedom to be themselves, however autistic that self might be, while still receiving unconditional love and support in the midst of their individual needs and struggles.

Let’s just say I know which lens I’d rather be seen through – and therefore, which perspective I want to take when raising my differently wired child.