I’m joining up with the seven quick takes linkup again this week, for the first time in a while, with a fitting theme for the last Friday of the year: 2018 favorites! My focus is going to be on the books I’ve read this year; with my end-of-the-year detour into fan fiction my booklist is shorter than it was in 2017, but it is still full of books I loved and want to share.

If you were following my blog this summer, this favorite should come as no surprise! This is one of the best books I have found for parents of neurodivergent children – one that honors their differences and supports parents in helping their children to remain authentically themselves while also learning to live in a world that is often critical of who they are. For a more in-depth review, see this post leading up to its release this summer. (You may notice I tried to run a giveaway for the book; well, no one entered, so if you feel this book would be relevant or helpful for you, let me know… I still have the extra copy 🙂 )

Science: The Emperor of All Maladies: a Biography of Cancer, by Siddhartha Mukherjee

This book offers an interesting take on cancer, as it examines the history of human interaction with cancer in all its ethical and political context rather than focusing solely the medical manifestations of the illness (though it delves quite deeply into the biology of cancer as well). I learned a lot and was deeply fascinated through the entire book (but as it was a library book, I can’t go back to pull up any awesome quotes for this post, unfortunately!). While it is very long, I think it is definitely worth the time and effort to read it, especially for anyone interested in biology, pathology, bioethics, or science policy.

Other Non-Fiction: Just Mercy: A Story of Justice and Redemption, by Bryan Stevenson 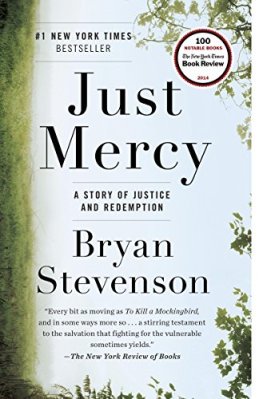 When you grow up in a privileged environment, it can be challenging to learn about corruption and brokenness in systems skewed in your favor. This book was difficult to read primarily because of the nature of its topic, and the injustices it exposed – whose depths I had no idea existed beforehand (even though I was aware of the biases in our judicial system, I was not aware of the extent of those biases, particularly in certain areas of the country). I picked up this book last Christmas on the recommendation of Nicholas Kristof of the New York Times, for both myself and my grandma, and both of us agree that it was a powerful and moving book, containing invaluable context for understanding (and hopefully healing) some of the racial and cultural divides in our nation. (For more of my thoughts, and some quotes, see this post from April.)

In this novel, an old British major slowly falls in love with a Pakistani shopkeeper (both widowed), to the general consternation of her extended family and their entire village. The interactions between them on both individual and sociocultural levels are simultaneously awkward, amusing, and enlightening (in other words, fairly realistic for two very different people from very different backgrounds thrown into contact with one another); and the twists and turns of the plot are both somewhat unexpected and very satisfying. Major Pettigrew especially, as a slightly cynical and cantankerous old British man finding himself in ludicrously unprecedented circumstances, is quite a wonderful character 🙂

I’m surprised I didn’t post about this book back in July! Dystopia is one of my favorite genres, and this one hit particularly close to home. It is set in the southern United States, in a future in which climate change catalyzes a second Civil War; with Northern forces applying external pressure and international agents internally taking advantage of hatred and discontent, the book follows one individual from poverty, through a refugee camp, to indoctrination and grooming in a shadowy terrorist cell. The methods and circumstances are drawn from the actual history of civil war and terrorism in the Middle East, but the culture and setting are undeniably American, and the juxtaposition reinforces both the humanity of people our culture often labels as “other” and the very real possibility that our nation too could be ravaged by the dark side of that shared humanity. I highly recommend it, but it is not a comfortable read.

LeGuin is an exceptional world-builder, and I have enjoyed all of her works, but this is in my opinion one of her best, exploring aspects of nationalism, humanity, and gender. How arbitrary are the categories with which we identify ourselves? When one of those categories is rendered meaningless, how do we cope with our own self-understanding, or refashion the image we present to others? How far can one stray from the center of a category and still be considered part of it, by either themselves or by others? And of course all of these questions are not so much discussed as illustrated and implied as the two main characters seek (in both the context of two different nations, as well as in almost total isolation) to accomplish a mission with global and even universal consequences.

Fantasy: Name of the Wind, by Patrick Rothfuss

The story here, as wonderfully epic and convoluted and fascinating as it is, in a world with magic and music and legend coming to life, isn’t even the main reason I have to choose this book (and its sequel) as my top fantasy book of the year. Rarely have I encountered an author who can make their prose sing as beautifully as Rothfuss manages to do here. My only disappointment is that the third book in the trilogy has not yet been published, so while each book so far has a definite story arc and is still satisfying to read, the overall story is incomplete.

What are some of your favorite books from this year? Please share in the comments – I always love to hear about good books to read!