And… that’s all I’ve got for quick takes this week! (Well, I suppose I could add that Rondel and I have almost finished The Horse and His Boy since last week’s takes. I’m not always sure just how much he understands, especially in places with lots of names and places, but he keeps wanting me to read more.) Visit the link-up at This Ain’t the Lyceum! I hope you all have an excellent week filled with unexpected pockets of joy 🙂

Finally, finally, our yard has come to life.

It’s been almost two years since we moved in to a home with a large empty dirt yard, and  slowly began to shape it as time and budget allowed – and the final step, this spring, was to add irrigation and plants.

How does your garden grow?

Head on over to This Ain’t the Lyceum for the rest of today’s linkup!

When I worked full-time, I would seasonally find myself walking back to my car at dusk past a row of orange trees in bloom. If you have never had the privilege of smelling orange blossoms, I feel sorry for you; sweet and sensual with a sharp almost spicy bite underneath, their perfume would flood the evening air, overshadowing the smells of asphalt and car fumes and cooking dinners in the nearby apartments. There aren’t many other plants whose scent is quite so powerful and intense (I believe lilacs are, though I haven’t lived in a place where they grow since I was very young).

Here in Arizona, one of the only other such plants that I can think of is the ponderosa pine. While there are many different species of pine, including several native to northern Arizona, the ponderosa has a very distinct scent: like honey and vanilla, with a whiff of hazelnut, sweet and heavy and warm, with only that faint nuttiness in the background in place of any other bitterness or spice. When the trees are healthy and hydrated, the sun’s warmth seems to pull the odors out into the air (or maybe keep them from blowing away), giving the whole forest a unique character. If orange blossoms make me think of a tower room with sunset-colored hangings, blowing in the breeze of an open window, where a couple is about to share in each other’s mysteries, then the smell of the ponderosa bark lingering in the air reminds me of C. S. Lewis’s description of Perelandra, where the outside air among the trees has a warmth and golden richness that our crisp cool world is lacking.

If my feeble attempts at describing their aroma have managed to convince you that you need to immerse yourself in the ponderosas at least once in your life, then Horton Creek Trailhead should be on your shortlist. Ponderosas are scattered all over northern Arizona, but they must be particularly concentrated here because their scent nearly overpowered me when I stepped out of the car, in contrast to Ellison Creek and Tonto Natural Bridge State Park (which have more of the typical clear, clean feeling in the air).

Parking for the trail is a short walk away from the actual trailhead, and two small creeks actually run near each other (and eventually join up, I believe) near the parking area, which led to some confusion on our part. So at first, instead of heading down the actual Horton Creek trailhead, we wandered up Tonto Creek along an elk trail and through the water. The grass was consistently up to Aubade’s chest and in some places was higher than Limerick; the creek meandered through level ground in places instead of the typical steep canyon; and blackberry bushes threatened to overtake the entire western side of the creek.

All that to say, it was wild and overgrown and absolutely beautiful. 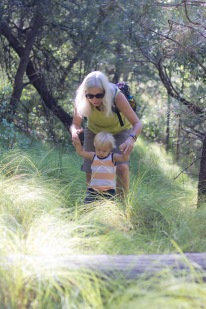 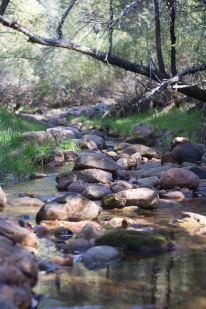 A short ways up the creek (short by the road; long by way of elk trails with an 18 month old who won’t walk because the grass is too tall) there is a short waterfall with a small pool at the bottom; just to the west of the falls is a path up to the road, and at the base of the falls below that trail is one of the largest blackberry thickets I have ever seen. We were a bit late for blackberries – I found about 10 ripe ones within reach – but I’m thinking that sometime in early September the bushes should just be covered with berries.

Being just a bit too late for the blackberries also meant that we were just a bit too early for the fall colors; only the sumac and a few other isolated leaves were beginning to deepen into red. Coming from the low desert, we still got quite excited about it, and we’ll probably be going up north more often over the next month or so to catch more of the changing autumn colors. 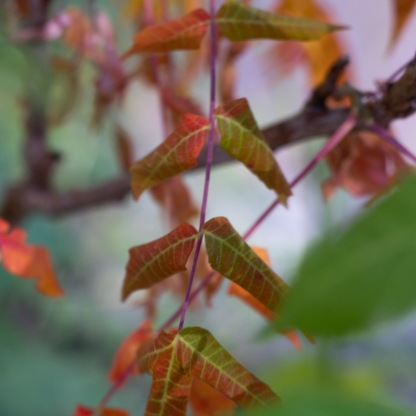 After we reached the waterfall, my mom hiked a bit further with the boys while Aubade nursed (teething plus the long grass had made her miserable – I was so glad to have another adult with me!), and we found an open area near the creek to play for a while. 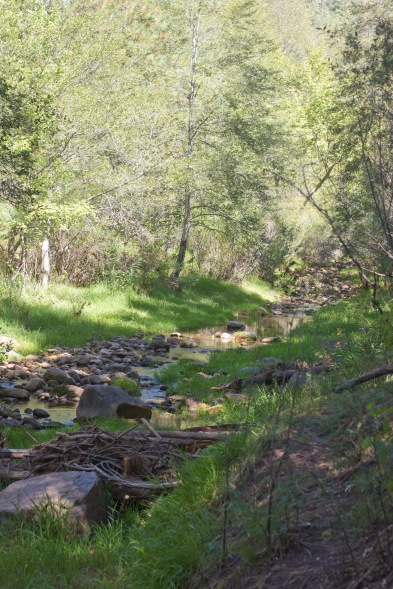 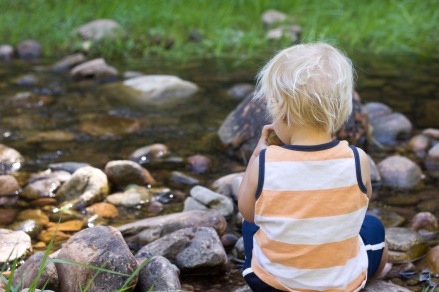 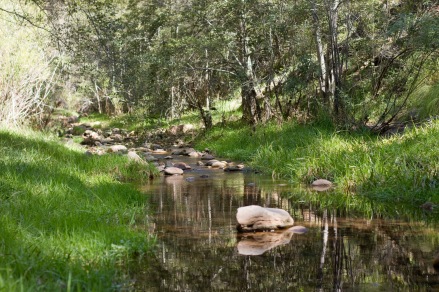 After that, we went downstream to the waterfall again and up to the road and back to the parking area for lunch. At that point, my mom wanted to find out where an actual trail was; she had hiked here before and was confused as to why the creek seemed so different than she remembered. So she explored a bit further down the road and discovered that we had actually been on Tonto Creek and never made it to the Horton Creek trailhead – where there was a very well-kept and walkable trail.

Since the boys still had enough energy, we decided to check out the real trail as well! It turned out to be wide and sandy, leading up the high ground between Tonto Creek and Horton Creek. Horton Creek was mostly dry at the beginning of the hike, unlike Tonto, although other hikers told us there was running water a mile or so down the trail; it was still incredibly green and lush, however. Aubade had a much better time on this trail since she didn’t have to push her way through the grass 🙂 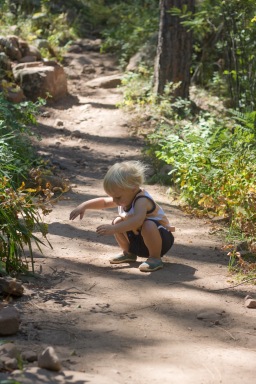 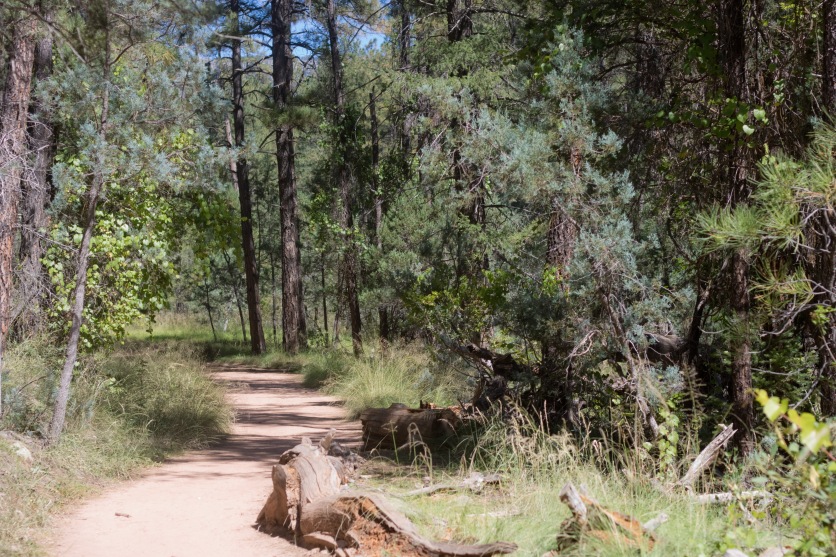 If we go back to Horton Creek, I would try to do the designated trail first, while everyone has energy and the temperature is lower, and then play in Tonto Creek after lunch. And I do think this is a spot worth going back to – there is a lot left unexplored, and I have the feeling that things change a lot here seasonally, with berries, changing leaves, and fluctuating water levels. Without another adult I would be loathe to attempt more than the well-marked Horton Creek trail, however! It was a challenge getting everyone through the undergrowth around Tonto, though worth it for the hidden beauty.

To reach Horton Creek Trailhead from the East Valley: Take the 87 north to the center of Payson and turn right onto AZ-260 E at the McDonalds; about 16 miles later turn left on Nf-289. The parking area for the trail is on the left just after a one-lane bridge; it is marked and has a vault toilet and picnic tables. To get to the trail, walk back down the road across the bridge and up towards the Horton Creek Campground. The trailhead is at the base of the campground and is well marked.

When to go: For maximum water flow, go in spring after the snow melt or during the monsoons. For blackberries, go anytime from late August through mid-September. For fall colors, go in October. And I can’t speak from personal experience, but I’m guessing that April or May would be best for wildflowers 🙂