We packed a lot of activities into one weekend!

Saturday was our fifth anniversary – but my sister’s husband’s brother (who is also a friend of ours) was getting married that evening, so we dropped the boys off at my parents’ house Friday night for a sleepover so we could celebrate a little early. The next morning I woke up early, being somewhat incapable of sleeping past 6am, and made cinnamon rolls for an anniversary surprise 🙂 He ate six of them over the course of the day, so I think they were a success 🙂 and I ate the other six between that day and the next, shh! So that’s a bit of {happy} and {real}: 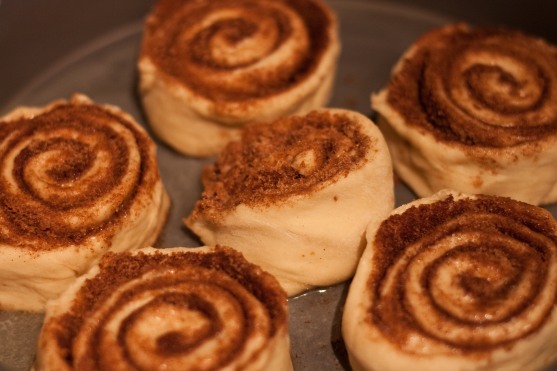 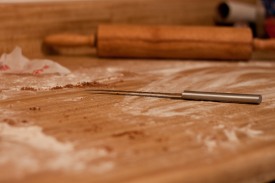 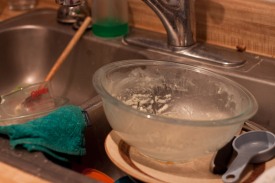 I didn’t take any pictures at the wedding, in part because the cameras honestly tend to detract from the ceremony in my opinion, but also because corralling two toddlers with no practice in sitting still through long events took both my hands, all my skill, and most of my patience. Fortunately they had a foyer area where we could watch the wedding without any of our noise disrupting the event! My sister, who was a bridesmaid, said she couldn’t hear anything; the wedding planner, who kept darting in and out of the foyer, seemed to think otherwise by the looks of exasperation and disapproval she kept shooting our way.

And in general, despite the fact that it was an exceptionally nice wedding and reception, and was set up in a very family-friendly way (as I had anticipated, knowing the couple), the attitude of the other guests made it really hard for me to enjoy it. Maybe all those older women were childless, or had forgotten what it was like to have young kids – but I got a larger dose of judgmental glances at that reception than I have ever gotten before. If you really want to make someone feel uncomfortable enough to leave, just keep shooting nasty looks at them… but if you want to be courteous, come over and express whatever’s bothering you and maybe it can be addressed. It didn’t help that our kids were the youngest there. We had a lot of young children at our wedding and reception, and I would have loved to have more – it is weird to me to celebrate marriage, the covenant that leads to new life, in a child-exclusive way – but there were only a few here, and I think the others skipped the ceremony and came late. Sigh. I don’t think I want to attempt that again; my social anxiety is bad enough without the blatant disapproval of others pushing it home.

Sunday was another story altogether, though. Since my sister and her husband were in town for the wedding, we had a family party at my parents’ house, including my uncle, his sons, his girlfriend, and his girlfriend’s daughters, whom I hadn’t met before. Again, I didn’t take many pictures, but it was mainly because I was too busy swimming and eating to think about it! It was good to be with family, to relax, to be free to be ourselves and let the kids be themselves, and to remember the love of family which matters more than the passing judgments of strangers.

I did get a few shots of my husband and Rondel swimming together, while Limerick was napping! The boys absolutely love the pool and spent hours in it throughout the day, with whoever they could persuade to accompany them.

On Memorial Day itself, we stayed at home and recovered from the weekend. I was intending to clean but after doing three loads of laundry, washing a couple batches of dishes, and vacuuming the floors, I was pretty much exhausted. I keep forgetting how much less stamina I have in the first trimester! The floors were in desperate need of vacuuming, though, so I’m glad I at least got that done. Next in line? The bathrooms. (Always the bathrooms… I hate cleaning the bathrooms, so they get put off, and then they get horrible, and then I want to do them even less, but then I finally do them and it is such a weight off my shoulders.) I had found a good routine for housecleaning over the spring semester, but my schedule has completely changed again and I have two fewer mornings at home, which makes cleaning more difficult as the boys are more tired and needy in the afternoon and dinner prep needs to be done. I’m sure I’ll figure something out before the schedule changes again, though!

Head over to Like Mother, Like Daughter for the link-up today! There will probably be a lot more beauty and happiness there than in this rather rambling and complaining post of mine – but I am glad and thankful for the special times we’ve had thrown in with the challenging ones this weekend.