I really do have some great pictures this week from our visit to the splashpad on Tuesday (I’m trying to go as much as possible while the weather is still warm, because it’s a great way to get the kids out of the house), but I haven’t gotten them uploaded from my camera.

There should be some pictures of our little garden on there too. We’ve planted beets, corn, basil, sage, mint, and oregano so far and they’re doing ok, except for a row of the corn that looks pretty burnt. Now that it’s starting to get cooler, though (highs in the 90s!) I’d like to plant my leafy greens for the fall growing season, too – it’s just about the right time to plant cilantro, arugula, kale, and spinach – all of which seem to be hard to eat when purchased from a store but which are tossed easily into just about every meal when available in the backyard garden. Do you find that to be true in your house as well? The store-bought produce will often go bad before I use it all up (especially greens), but anything that we grow ourselves is devoured immediately!

Sometimes it seems like life is a juggling act and I’m a very clumsy juggler – at least one ball always seems to be getting dropped. On a positive note, we got a lot of laundry and house-cleaning done this weekend, thanks to my very helpful husband, so I don’t feel overwhelmed in every area of life right now, just the normal two to three areas. The kids had peed on all the beds so the laundry was fairly important… and spilled a bowl of cereal (dry) under the couch, so vacuuming was rather needed as well… so it goes with toddlers, I suppose.

I do have a {real} picture for the first time, though, from one of the more hectic nights this week! 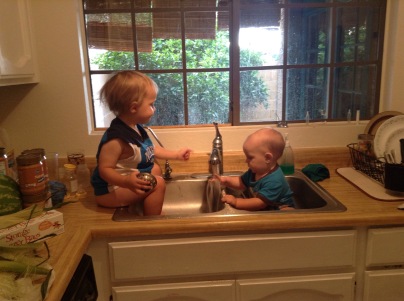 What do you do with a baby who wants to see what you’re doing and be in the kitchen but won’t consent to being held still in a wrap and is too unsteady and short to stand on a chair? I don’t know what your solution is, but apparently mine is to let him play sans diaper in the kitchen sink… The toddler heard me putting said baby in the sink and requested to play as well, and surprisingly they played together in peace for the 10-15 minutes I needed to finish getting dinner made.

You can see all the groceries still sitting out on the counter too… they didn’t get put away until after bedtime. But at least it was all clean and straightened up before I went to bed, so I wouldn’t have to wake up to the mess! It’s the little things 🙂

Don’t forget to head over to the link-up and visit other blogs! It’s encouraging to see the crazy and the happy in everyone else’s life, at least for me – it gives me the reassurance that we’re all in this together and no one is doing it perfectly, but that we can all choose to see beauty and find contentment right where we are.